When Australia went into lockdown and businesses and industries came to halt, one of the hardest hit were our Creative industries and it was encouraging to see how so many began to pivot and create new ways to share their creativity. Who’s Your Baghdaddy, or How I started the Iraq War musical is one such story, and as they prepare to launch this Wednesday 24th June 2020 we got the lowdown on the musical and how they overcame thanks to choreographer Leah Howard.

In one paragraph what is Baghdaddy the musical about?

Inspired by a true story, Who’s Your Baghdaddy, or how I started the Iraq War is a satirical musical comedy with music and book by Marshall Paillet, lyrics and book by A.D. Penedo, based on an unproduced screenplay by J.T. Allen. Presented as a support group for people who started the Iraq War this dark, boisterous and irreverent story follows a handful of mid-level spies whose vanity and office politics contributed to the worst intelligence blunder in modern history. The show was produced Off-Off Broadway at the Actor’s Temple in 2005 and Off-Broadway at the St Luke’s Theatre in 2017.

The musical is set in an “AA-style” support group meeting for people who believe (or don’t want to believe) that their actions lead to the start of the Iraq War. The story focuses on the recruitment and eventual disgrace of an Iraqi defector, codenamed “Curveball” and the use and misuse of his testimony by the CIA, State Department, and Bush Administration. In the show, as in reality, Curveball provides Western intelligence agencies with false intelligence on Iraqi mobile weapons laboratories. This intelligence, which is later discovered to have been fabricated, was used by Secretary of State Colin Powell in his 2003 speech to the UN Security Council to justify the invasion of Iraq and overthrow Saddam Hussein. The show is a reflection of how people in power, whether high, mid or low level in government, shape and form our world and the importance of keeping them accountable in times of crisis. In our current times, this feels more meaningful than ever.

It’s Australia’s first fully online musical, tell us how this came to fruition?

Well, our Producers Curveball Creative were actually going to stage this play this year and then the Pandemic hit and they got creative, got a team together, Neil Gooding our Director (who is in New York and Skyping in to rehearsals) myself as choreographer and a heavy hitting technical crew to do all the livestream and video, sound and lights and thought let’s get creative and do this as live stream show 5 nights in a week but always live and in a Covid Safe Space allowing us to be together whilst socially distant and safe.

We know you’ve been rehearsing in isolation, did you have to conduct auditions on-line? And what was the experience of that process like?

Yes all auditions were online and we Zoomed many times a week for over a month, early. mornings too as our Director is in New York and we are trying to be kind to his time as well as our own. Usually for Musical Theatre auditions the video audition process isn’t always ideal but for this I guess looking back now it was exactly how it should be really as we were getting a taste of how they work on screen and connect through the screens even more.

How have you got around the theatres not been open?

With theatres being closed we have moved this show into a house. The producers have rented a house for 3 weeks. Each actor has their own bedroom, go pro camera and monitor. They are all set up in a zoom call for the entirety of the play. Every room has been designed and lit and is the only space they all work in and live in for the show. They are also responsible for cleaning down and sanitising their desks and rooms after every rehearsal session or show. The crew are in the lunge living area of the house set up in areas for Sound, Lighting desk and Technical desk which controls the live stream every show. I am in the corner of a lunge room watching the show on a wall projector and our Director is on a big screen TV near the back yard on Skype from New York! CRAZY COVID CREATION!!

What is the experience of rehearsals been like, working with a director based on New York?

Rehearsals have been in covid space rooms that are big enough to hold all cast and crew that need to be in the rehearsal room. Usually in a normal Musical Theatre rehearsal setting you can have people coming in and out as they like and need to but in these times some of the spaces are only allowed the exact amount of people in the show with no room for extras as the space has not go the sq meterage in size to accomodate all and not to mention that we could not sing, dance or act facing each other as the possibility of spit particles spraying towards another actor is a real thing and could be a possible way of transmission.

We arrive at work every morning and have our temperature checked and sign in and then sent to wash our hands and sanitize. No hugs or sharing of food is allowed and we all have to bring our own break utensils and take them away with us at the end of the day.

When does the show debut, and where can people buy tickets?

The show is on 24-28 June 2020 730pm head to www.baghdaddymusical.com.au for tickets starting at $22 -$100-  pay what you like style ticketing in this new world of theatre so please come over and watch and enjoy and keep the arts alive through this hard time!

Lastly describe the musical in 3 words? 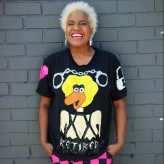